India-born poet Vijay Seshadri has won the prestigious 2014 Pulitzer Prize in the poetry category for his collection of poems “3 Sections.” 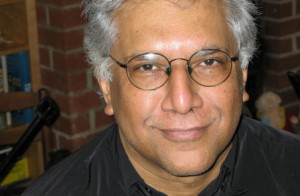 Seshadri’s ’3 Sections’ is a “compelling collection of poems that examine human consciousness, from birth to dementia, in a voice that is by turns witty and grave, compassionate and remorseless,” the announcement said.

The prize for the poetry category was given for a “distinguished volume of original verse” by an American author.

According to Seshadri’s biography on the Pulitzer website, he currently teaches poetry and nonfiction writing at liberal arts college Sarah Lawrence in New York. Born in Bangalore in 1954, Seshadri came to America at the age of five and grew up in Columbus, Ohio.

His collections of poems include James Laughlin Award winner The Long Meadow and Wild Kingdom (1996). His poems, essays, and reviews have appeared in prestigious publications including the American Scholar, the Nation, the New Yorker, the Paris Review, Yale Review, the Times Book Review, the Philadelphia Enquirer and in many anthologies, including Under 35: The New Generation of American Poets and The Best American Poetry 1997 and 2003.

Seshadri has received grants from the New York Foundation for the Arts and the National Endowment for the Arts, and has been awarded the Paris Review’s Bernard F Conners Long Poem Prize and the MacDowell Colony’s Fellowship for Distinguished Poetic Achievement.

Seshadri is the fifth person of Indian origin to bag the prestigious award, the first being Gobind Behari Lal in 1937. Lal, a science editor, was awarded the Pulitzer in the Reporting category for his coverage of science at the tercentenary of Harvard University when he was working for Universal Service. He died of cancer in 1992.

Indian-American author Jhumpa Lahiri got Pulitzer for fiction in 2000 for her collection of stories “Interpreters of Maladies”.

Journalist-writer of Indian origin Geeta Anand was the next to get the award. Anand was the investigative reporter and feature writer for the Wall Street Journal and won the award in 2003 for “clear, concise and comprehensive stories that illuminated the roots, significance and impact of corporate scandals in America”.

Indian-American physician Siddhartha Mukherjee’s acclaimed book on cancer, ‘The Emperor of All Maladies: A Biography of Cancer,’ won the 2011 Pulitzer prize in the general non-fiction category.