First, one correction.  The backdrop of his oath-taking, Rashtrapati Bhavan, is not the Prime Minister’s residence, but that of the President of India (“Modi was sworn in on the forecourt of the historic residence, Rashtrapati Bhavan…”).  A better description of that backdrop would be the Mall in front of our Capitol building.

Second, we need to address Mr. Modi as the Prime Minister of India, the head of State of the largest democracy in India, just like we address Mr. Obama as our President, and as the Head of State of the oldest and the most powerful democracy in the world.  We do not label our President as a Muslim, but as a leader of all Americans.  Similarly, Mr. Modi, a devout Hindu, is a leader of 1.1 billion people of India – one in every seven human on earth. 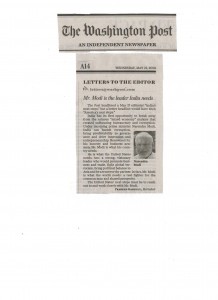 So, instead of (mis)labeling Mr. Modi and India, let’s celebrate our common bond in democracy and religious freedom, join hands to fight terrorism, and build on trade and investment.