As many news reports noted, the past week was significant just for the numbers of Indian ministers in the United States at a given point in time. However, the more did not necessarily make the merrier. 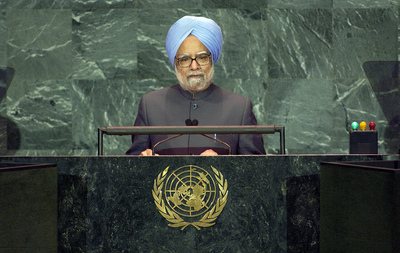 No less than nine members of the Indian Council of Ministers were in the US, including the primus inter pares, PM Manmohan Singh. The PM was in the  U.S. to address a session of the UN General Assembly and  his speech was notable, as one commentator put it, for its reference to “old ideological positions and  old constitutencies,” meant to signal his “disappointment with the West.” The PM seemed to emphasise the point by having a bilateral meeting with an old foe of the West, Iranian President Ahmedinajad, an event described by another commentator as a virtual affront to the United States. What India has to be disappointed about is unclear, and whether the disappointment will be followed up with distancing remains to be seen. Whether that is the most appropriate strategy is also moot in the rapidly changing global scenario.

Many of the Ministers, from Commerce to Power, to Finance were in the U.S. to drum up investment for mega- infrastructure projects back home. There were the usual assortment of think tank reports and seminars that usually coincide with such ministerial visits, but increasingly, they offer only new wine in old bottles, reflecting the current stalemate, if not slump, in relations.  An address by the recently promoted Deputy Secretary William J Burns at the Brookings Institution was even titled “Is there a Future for the US-India Partnership?”

Commerce Minister Anand Sharma made a valiant effort to break the logjam on the Totalization Agreement issue but came a cropper. This issue has been attacked from various angles, having earlier being piloted by the Minister of Overseas Indian Affairs. Mr Sharma made the point to his interlocutors that there was no reason not to sign an agreement with India pleading incompatibility between social security systems since India had signed totalisation agreements with many European countries  with which the U.S. had an agreement but this argument cut no ice.  This was not surprising since Under Secretary Blake had made it clear in his last read-out on US-India relations that the U.S. was in no mood to transfer over a billion dollars to India in the current economic mess it found itself in. There was also talk of progress made on a Bilateral Investment Treaty, even though it is almost as if when one side blows hot, the other side blows cold.

The other legs of the relationship, business and the diaspora, can, at best only play a supporting role, and are to an extent affected by the buffeting winds of the strategic relationship. The India-US CEOs forum also held its annual meeting in Washington this past week, but has increasingly less to show for being such a high-powered gathering. While India has a ready-made constituency in the U.S. in the form of the Indian Diaspora, Hillary Clinton’s public diplomacy initiatives are beginning to show results at least in India, with U.S. embassies and missions making all out efforts to engage with the average Indian through all the resources available from   social media to innovative meetups titled Charcha, Chai aur Coffee. The American Center in Delhi even provides a venue for Startup Saturday, a forum for young entrepreneurs to come together to share and learn from each other.

The blow hot, blow cold phase of the relationship into which we have entered seems set to continue into the foreseeable future with, as William Burns himself admitted in his speech, both governments distracted and pulled in different direction by a combination of domestic and external issues.