This year, we witnessed the emergence and political victories of many Indian-American leaders in the current American political scene. They have emerged leaders from diverse educational and professional backgrounds although with something in common: the urge and the mission to serve the community at large. This blog post highlights the achievements of some of these leaders who have consistently made an impact to their multi-cultural communities in the U.S. These leaders also reveal an insight into their commitments in their chosen disciplines. Sapana S. Shah won a berth in the Edison Municipal Council of New Jersey. She has been has been working with the Edison Board of Education since 2011. The young attorney at law specializes in litigation matters relating to personal injury, municipal court matters, criminal matters, employment discrimination, business & commercial litigation, and family law. 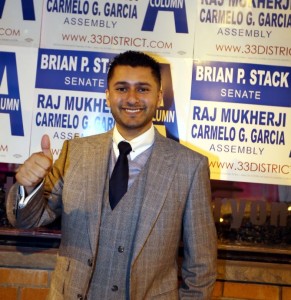 This year, Raj Mukherji, a former Deputy Mayor of Jersey City, New Jersey won the State Assembly elections to New Jersey’s 33rd Legislative District. He was part of the American military intelligence after he enlisted in the Marines post the 9/11 attacks; he is known for his philanthropic activities too. He attended the University of Pennsylvania from where he earned a Master’s degree. He now joins the state assembly post with fellow Indian American Upendra Chivukula in New Jersey.
Upendra Chivukula is the first South-Asian American in the 120-member state legislature and he is also the highest ranking South-Asian elected to office in New Jersey. He has been a member of the New Jersey state assembly since 2002. He is the first Indian-American to be elected to the New Jersey General Assembly and the fourth Indian-American to be elected to the state office. He has also been a recipient of awards including New Jersey Technology Council’s Legislative Advocate for Technology Award, NJ Small Business Development Centers’ Legislative Award, induction into the High-Tech Hall of Fame, New Jersey Policy Research Organization’s – Leader of Innovation, NJ Small Business Development Centers’ Legislator of the Year Award, NAACP Edison/Metuchen Branch – Adam Clayton Powell Award, and the ADL – Americanism Award.
This November, Latha Mangipudi won the special elections for State Representative in Hillsborough District 35 in New Hampshire by a margin of 59%-41%. She is a trained Speech Language Pathologist (SLP) by profession and she is known for her role in the field of education at Nashua, where she resides with her family. She also works with people with special needs and she is member of the American Speech-Language-Hearing Association (ASHA).
Town Councilman, entrepreneur, and business development executive Steve Rao emerged winner in the Morrisville City Council election in North Carolina this year. He is now the only Indian-American in the Council and was the only incumbent to return to office.