U.S. Congresswoman Tulsi Gabbard (HI-02) released the following statement on the results of the Indian election that concluded earlier this week: 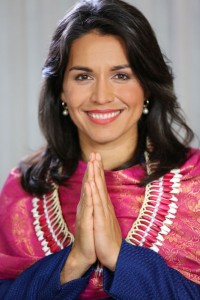 “I recently spoke with Narendra Modi by phone and congratulated him and the Bharatiya Janata party for winning a majority vote in India’s Lok Sabha. This election was an extraordinary achievement for the 550 million Indians who voted over the course of six weeks in some 930,000 polling locations. I look forward to working with Mr. Modi and other members of the Indian government toward our mutual goals of peace, stability, and economic growth in the Asia-Pacific region. A partnership between the world’s two largest and greatest democracies is necessary for us to successfully address the many global challenges we face, including economic growth, bilateral trade, the environment, terrorism, and security.”