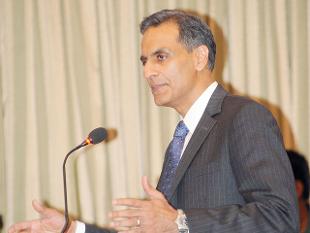 US Ambassador to India Richard Rahul Verma today metChief Minister Akhilesh Yadav and said an American delegation would soon meet the state officials for a detailed discussion on developing Allahabad as a smart city.

Verma also met Governor Ram Naik during his visit and expressed his happiness that Prime Minister NarendraModi’s US visit and President Barack Obama visit to India has contributed to a “fresh start” in the relationship between the countries.

The US Ambassador said that America wants to increase economic and trade relationship with India and would also assist India in the education sector.

He said that the US was working on developing smart cities in UP and an American delegation would soon meet the state officials for a detailed discussion.

During his meeting with Akhilesh, Verma expressed his willingness to strengthen and increase bilateral ties with India, specially with UP.

The ambassador said a number of US entrepreneurs were interested in investing in the UP and enquired about sectors suitable for investment.

Akhilesh said that there were immense possibilities of investment in the state, adding, the government has implemented pro-investment policies under which a number of facilities were being provided to the entrepreneurs.

The chief minister said that US investors could participate in sectors like agriculture, agro-processing, waste management and infrastructure development.

He assured the US ambassador that the UP government would extend all support and help.

Naik said people from India want to make good relationship with the US.

The Governor said that the state has immense opportunities to attract tourists and the government was implementing new schemes to promote this sector.

Naik also presented Verma with a picture of historical Roomi Darwaza and a book ‘Birds of Raj Bhawan’.

On his first visit to Lucknow after taking over as the ambassador this January, Verma would visit Isabella Thoburn College tomorrow.

After meeting with the students and faculty, he would also visit the American Corner on the campus.

He is scheduled to meet several top leaders in the fields of education, politics and culture during his visit to the city.