It is widely acknowledged that American & Indian societies are similar in many ways. But there are a number of differences between these two societies, differences that lie at the core of their democratic practices. Such differences keep creating controversies between the U.S and India. The latest controversy is the security pat down of Indian Ambassador Meera Shankar at Jackson Airport in Mississippi.

The facts are clear. Ambassador Shankar was singled out for a security check because she was wearing a sari. When she presented her diplomatic status, she was taken to a VIP room for the security pat down. The Indian Government was angered by what they termed as “unacceptable” treatment of an Indian Diplomat. The U.S. expressed regret and promised to ensure that such incidents are not repeated. But the U.S. has not apologized. This has created an uproar in India and perhaps rightly so.

But this issue might illustrate a significant difference between the ways these two countries treat their own citizens. Look at the complaints lodged by the Indian Government against what it considers mal-treatment of its citizens. Every single complaint is about what the Indian Government calls a VIP – a Very Important Person. Forgive me, I mean to say VVIP or Very Very Important Person.

This is no joke. These words are commonly accepted in India and used by the Indian Government. Check out any Indian Government event or any event organized by Indians. You will see a special section for VVIPs and VIPs; you will notice special handling of people of these categories. The ordinary Indian is always treated as a lower class person with a lower level of care.

Who are these VIPs? Apparently any one with “connections.” So many VIPs were created in this process that the Indian Government had to create a special category called VVIP.

How many times has the Indian Government publicly complained about how ordinary Indian citizens are treated in other countries?  Forget about treatment by other countries. Ask Indian-Americans how the Indian Consulates treat them. Stand in line at any Indian Consulate and you will hear horror stories. Try calling the Indian Consulate, say in New York. Unless you are a VIP or a European-American, you will be ignored at best. This is also the attitude you see at any security checkpoint in India. There may be a long line but VIPs routinely bypass the line and go through.

This VIP type handling also extends to foreigners in India. The Police, the Security Staff and most local government officials are careful not to subject foreigners to any trouble. Recently, the Australian Cricket team, after losing its series against India, went on a rampage. According to media reports, they broke furniture and threw it out of the windows. The police saw this but did nothing. When asked, a police official replied they did not want to embarrass the Australians.

Indian Media often use the word “commoners” to distinguish them from VIPs. This word says it all. The U.S treats all Americans as VIPs and others as commoners. India treats Indians as commoners and foreigners as VIPs.

America is relentless about its focus on security. Its overriding mission is to prevent a terrorist attack on America. This is why security guards at airports are given the license to search anyone they feel should be searched. This is due to the realization that the local security guard is the critical part of the security chain. If their behavior hurts feelings of some people, so be it.

India is relentless about how its VVIPs are handled. Foreign officials are included in the VVIP status. Protecting the feelings of VVIPs is far more important to India than preventing terrorist attacks on Indian citizens. This is why airport security procedures are centralized and airport security staff is not given the license to stop and search any one they feel should be searched.

Rather than complaining loudly about who gets frisked in America, the Indian Government should establish a policy of randomly and regularly frisking Foreign Diplomats and VVIPs at Indian Airports. If a senior American Diplomat is subjected to a physical frisk, I suspect that diplomat would at least publicly welcome the high level of security at Indian airports.

But would Indian VVIPs publicly welcome such random frisking? I doubt it. Because that would put Indian VVIPs at the same level of the common Indian. That is a consummation to be devoutly avoided in democratic India.

I await the day when the Indian Government begins treating the ordinary Indian as a VVIP. Perhaps, Ambassador Meera Shankar can begin this process with ordinary Indian-Americans at the Indian Embassy in Washington DC. 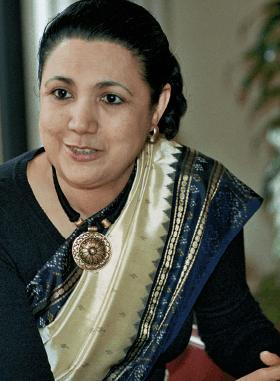