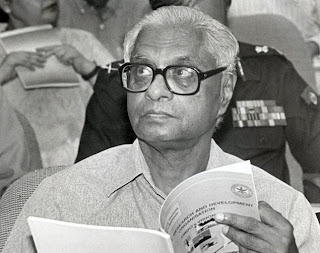 On 2 Feb, K Subramanyam, often referred to as the Bhishma Pitamaha of the Indian Strategic community passed away. During his years of published writing, Subbu’s views and analyses swung from a consistent but measured anti-American stance to one favoring a joint US-India approach on most world strategic issues. This extraordinary u-turn was another measure of the greatness of the man – that in a changed world he was capable of changing his views and his conclusions on Grand Strategy. Many thinkers his age plodded on in their furrows, too inflexible or too frightened to change their outlook and their explanations on how the world conducted its affairs.

In the 1970s, much of what the U.S. did to apparently win the Cold War hurt India, and of course Subbu deeply. A great deal had to do with arming Pakistan, but Subbu was alone, raising a voice in panic alarm in the eighties as he saw Islamabad moving towards a bomb capability , unheeded by his own colleagues. He saw the U.S. as complicit as much as he saw the consequences of Pakistani state irresponsibility, once they had the bomb under their belt. His computer-like mind was never at a loss for precedents, incidents and promises that the U.S. had made, often going back a quarter century, to prove Washington’s unbroken anti-India stance. This cold blooded accuracy won him respect among his American critics because they saw they confronted facts and not sentiment.

All his disapproval changed in a few short years after the end of the Cold War and when the India-US relationship re-began, after both sides acknowledged how bad it had been. When Bush went out of his way to remove India’s technological isolation with the nuclear deal, Subbu saw that it signaled a seminal change in India’s status – a lift for India to help it on its way to a possible great power status. It wasn’t that Subbu had no sentiment; he did- even on behalf of his ungrateful countrymen who thought that lack of gratitude signaled high statesmanship.

Subbu soon pieced the new jig-saw puzzle together. There were many pieces to fit in. One was the Manmohan Singh reforms that jetted India into the 9% growth league and the possibility of greatness. A second was the huge, rich and successful Indian Diaspora who, by denying themselves luxuries, had clawed their way to becoming the richest ethnic community in the US, almost all of them as technological professionals. A third was Cancun, where Subbu saw the outlines of the next technological revolution which the world was demanding – to simultaneously live well, and yet not pollute the Earth. The fourth and final one was that which brought all these pieces smoothly together – The removal of the technological isolation would enable the brilliant Indians in the U.S. to be part of the next alternate energy revolution. The great final pieces of innovation would take place in the US, with India as the research supporting base. The resultant prosperity would halt the U.S. economic decline, and propel India forwards, even possibly past China, with the two democracies joined together in mutual success. What, Subbu would ask, was the alternative to the Democracies deciding how the world should be run?

When Subbu made his pronouncements, after careful analysis, the audience always presumed that it would, and must be brilliant. Few realized, what intellectual honesty was required for a man in his late seventies to make the U-turn that he did. But the ideas that Subbu came up with were worth the courage and clear headedness that he put into his U-turn, tyres smoking. As the world is challenged by the possibility of a rising but autocratic power, calling itself a Republic, it is well that the democracies and the real Republics, independently analyze their way into mutuality.