In January 2014, Indian-American Dr. Rakesh Khurana was appointed Dean of Harvard College adding to the growing list of Indian-origin academic stalwarts who are heading premier academic institutes. The list also includes Dr. Dipak C. Jain, Dean of INSEAD; Dr. Nitin Nohria, the first dean of Indian origin at Harvard Business School; and Dr. Sunil Kumar, Dean of the University of Chicago Booth School of Business.
Now add Dr. Sanjeev Kulkarni to the list. Dr Kulkarni who has been appointed as the new Dean of the Princeton University Graduate School will take charge from March 31, 2014. If we take a look at Dr. Kulkarni’s academic career, he holds a plethora of esteemed degrees which includes a B.S. in Mathematics, B.S. in Electrical Engineering, M.S. in Mathematics from Clarkson University in 1983, 1984, and 1985, respectively, the M.S. degree in Electrical Engineering from Stanford University in 1985, and the Ph.D. in Electrical Engineering from M.I.T. in 1991. But its not only his trailblazing educational background which made him a frontrunner for this position, it’s his dedication and love for teaching which made him a name to reckon with. It then comes as no surprise that he will leading an educational institution where close to 2,600 students pursue master’s and doctoral degrees in 42 departments and programs. 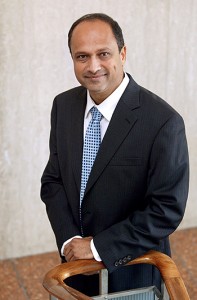 In his own words, Dr. Kulkarni felt extremely delighted at being chosen for this esteemed position and wants to make full use of this opportunity to serve the University and create an impact in a new role. He says, “It is an honor and a privilege to have the opportunity to serve the University in this capacity. I look forward to working with President Eisgruber, Provost Lee, the trustees, and colleagues and students across campus to advance the mission of the Graduate School.”
Dr. Kulkarni’s appointment is especially inspiring for young and aspiring Indians back home who keenly follow the route of these intellectuals to seek better academic prospects in the West. The grim reality of the situation in the Indian job market is that there would always be a dearth of the right-skilled jobs, a lack of political will to set advanced research infrastructure in educational hubs, an abundance of red tape to absorb the entire graduate fold. This acts as a catalyst to the ever-growing brain drain; however, it just goes on to show how many aspirants of higher education at the Masters level from India also make it to the most prestigious and top-ranked business schools in Europe and North America after being rejected by the leading business schools in India. They are more successful abroad than they are in their country of origin.