US India Political Action Committee (USINPAC) as a bi-partisan organization has been the voice of Indian Americans for over a decade. They have collectively represented the strength of Indian Americans and the impact of USINPAC’s involvement has often made the difference. USINPAC has always supported deserving Indian American candidates and Congressman Ami Bera is one amongst them.

Talking of Dr. Ami Bera, he became only the third Congressman of Indian-origin in the 226-year history of the US House of Representatives, the other two being Bobby Jindal and Dalip Singh Saund. Son of Indian immigrants from Gujarat, the journey of Indian-American physician Ami Bera began when he was officially elected for the US House of Representatives in 2013. Bera, a representative of the Democratic Party defeated Republican incumbent Dan Lungren by 9,191 votes for the Seventh Congressional District in California. But the real feather in his cap was his appointment to two key congressional committees that would help him play a key role shaping America’s foreign and science policies. It was a great honor for the Indian American community to have one amongst them named to the House Foreign Affairs Committee and the House Committee on Science, Space and Technology. 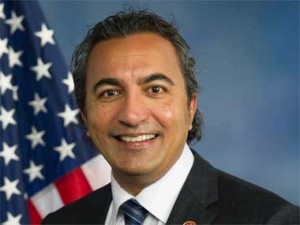 Bera has become an example of inspiration for the young generation. His initiative ‘Coffee with your Congressman’ is very popular and during these sessions Ami and his staff spend time to know more about the issues faced by people- be it helping veterans receive backlogged VA benefits, assisting seniors with Social Security and Medicare or maybe help get a stalled passport, Ami tries his best to ensure that no voice goes unheard. During his twenty-year medical career, he has worked day in and day out to improve the availability, quality, and affordability of healthcare. In Congress he uses the skills he learned as a service provider to listen to people and to put their interests first. As an Indian American, he has always been eager to visit India and on his last trip to India – his first since taking office, Bera helped facilitate an agreement between the Confederation of Indian Industry (CII) and the University of California Davis Postharvest Technology Center to collaborate on postharvest technology to reduce food losses due to spoilage. With so much credibility attached to his work, supporting his re election in the upcoming elections is a decision which would provide the Indian American community the required impetus and USINPAC is doing just that by supporting deserving Indian Americans.
Not just Ami Bera, USINPAC has in the past supported various candidates like Latha Mangipudi, Bobby Jindal, Nikki Haley, Kamala Harris, Swati Dandekar and many other deserving Indian Americans who have gone on to become success stories in themselves. Not just that, USINPAC has constantly worked on various issues that are important for the Indian American community. Their approach of providing bipartisan support to candidates for federal, state and local office who support the issues that are important to the Indian American community is what differentiates USINPAC. So, it’s your turn now. Join USINPAC! Get involved!